QUOTE/UNQUOTE: I AM THE BORG 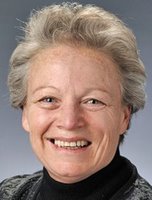 "We didn’t tell them they couldn’t print a paper, we just said we weren’t going to pay for overhead and salaries and paper to do so."
- Elaine Perilla, JCCC Board of Trustees chair. 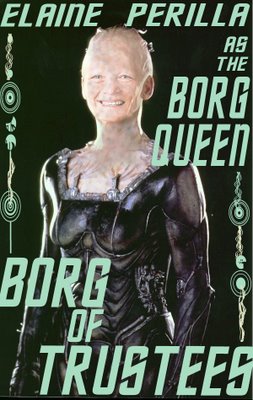 Nine days after accepting the position, the college's pick for vice president of Student Services, Teresa Williams, has reconsidered.

Day applied for the position in 2001. However, the college instead hired Jon Long. Long announced his resignation in February citing institutional intimidation.

Long tried to have the resignation rescinded when allegations of sexual harassment by then college president Charles Carlsen surfaced. Despite support for Long from students, the Board of Trustees rejected his request. Day applied for the position again and was again rejected in favor of Williams.

A posting on Infolist nine days ago announced William's arrival.

NEW VICE PRESIDENT OF STUDENT SERVICES Pending approval by the board of trustees at their meeting June 15, Dr. Teresa J. Williams, Highland Springs, Va., will be named the new vice president, Student Services. She will start at JCCC July 31, although she will be on campus at the end of June to meet with people and explore the community.

During her May 23 presentation Williams responded to a question asking how she'd advocate for students possibly against the wishes of her supervisor or the Board of Trustees. Williams quickly replied that she'd rather work at Wal-Mart than compromise her integrity.
by Miguel M. Morales

OVERLAND PARK – As student journalists attending Johnson County Community College, we must inform our readers that we will not pursue publishing The Campus Ledger either in print or online this summer.
Despite efforts from our supporters to cover the inflated expenses the board cited at their June 15 board meeting, we cannot accept these donations. Taxpayers should not have to provide additional funding when the true budgeted figures show The Ledger has funds to cover publication. In addition, working on The Ledger without pay as the trustees suggested would violate college policy.
We did not make this decision lightly. Defending ourselves from the attacks of the trustees and the college’s lawyers while scrambling to secure alternative funding for a new publication could compromise our journalistic standards. We are unwilling to gamble our integrity or our reader’s trust. After all, this staff initiated a 13-month investigation that broke the story of former president Charles Carlsen’s alleged sexual harassment that lead to his resignation/retirement.
The Ledger not only stands as the voice of students, it stands as the voice for the campus community. Our purpose in investigating and reporting this summer was, and remains, to cover these important, far-reaching stories in The Ledger. Covering this story requires a lot of time and energy. We have to manage the college’s army of lawyers and administrators while attending to our responsibilities as students, employees, and family members.
We must thank members of the campus community and of the press who support freedom of speech and who stand committed to help us in the fight against censorship. We also extend thanks to those who came to our offices, sent letters and e-mails and to our silent supporters as well. Your support helps illuminate the Board of Trustees’ manipulations of funds, students, employees, and the residents of Johnson County. You’ve strengthened our resolve to continue reporting the story that began as in investigation into unlawful harassment but grew to encompass, policy violations, cover-ups, Kansas Open Records Act violations and now censorship.
Clearly, our mistake as student journalists came in trusting that the trustees would embrace this teachable moment by allowing the campus community access to information on the appointment of an interim president and the search for a permanent president.
We accept this opportunity to continue our in-depth investigations, to analyze our censorship concerns, and to regroup as a staff for the fall. We invite the media to continue reporting the events at the college and with our supporters and our readers to continue asking the hard questions.
by Miguel M. Morales 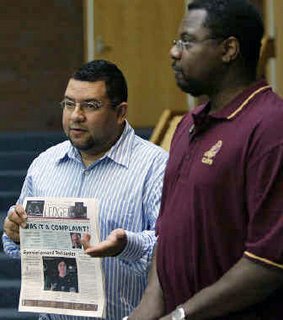 No journalist wants this.

We investigate and report news -- We don't become it. Yet student journalists find staying out of the headlines difficult as colleges seek the business model.

Before picking up reporter's notebook we must know and abide by three different sets of policies.

Student Policies - In order to report for our publications we must be students. We must abide by student codes of conduct. However some of these hinder our ability to report.

Ever had to ask aggressive questions of a student government leader? This qualifies as harassment.

Ever wait outside the president's office because he keeps cancelling meetings? You've disrupted the normal operations of the college and possibly violated assembly provisions.

I certainly hope you never used a voice recorder or camera while interviewing players in or near their locker room. Just the presence of those items in a private space may call for your expulsion.

Employee Policies - For those of us who get paid, we are employees of our colleges.

Has a student leader lost a scholarship or stepped down because of his or her GPA? You can't report it. That violates FERPA.

Did and ambulance come to campus because a staff member had chest pains and you discovered he or she had heart problems in the past? You can't report it. That violates HIPAA.

Newsroom Policies - Sometimes the professional newsroom ethics and policies we follow in our campus newsrooms contradict our student and employee policies.

Our editorial boards must examine all three sets of policies and strategize on how to counter provisions hindering our ability to report. Yet, we must also remember these student and employee policies protect student journalists.

Use the student code of conduct to manage angry and possibly violent readers.

Use the tools like harassment and grievance procedures described in the employee policies to document the administration's attempts to silence you.

Student journalists don't enjoy the luxuries afforded our professional colleagues. We don't have lawyers on call. Our main supporters are subject to retaliation including termination at the whim of the college.

We depend on funding from the institution we're charged to investigate. It's imperative we understand these three sets of policies that influence our ability to report because one day, we just might become the story.
by Miguel M. Morales

OVERLAND PARK – As student journalists at The Campus Ledger we were disappointed to learn last night that the Johnson County Community College Board of Trustees voted 1-5 to disallow us from publishing a summer edition of the paper that in April was the first to break the story leading to the retirement of former president Charles Carlsen.

As student journalists at Johnson County Community College we have been taught both the power of the press and the responsibility necessary to exercise that power in following a story wherever it leads and to publish without fear or favor.

Last night, the Board of Trustees, with the exception of Jon Stewart, muzzled the watchdog press and at the same time shot the messenger -- before the details of an independent investigation into the allegations leveled at the former president emerge later this summer.

To justify denying our summer staff request, trustee Elaine Perilla, who has been acting as the de facto college president until Larry Tyree takes the interim helm July 5, had Gerald Baird, vice president of Administrative Affairs, create budget numbers one day before the trustees meeting to make it appear as if summer operations would cause The Ledger to spend money not in its budget.

That is simply not true. In fact, in the past six years, The Ledger has contributed money back to the student general fund at the end of the year and this is in addition to the revenue generated by sales of advertising.

The only conclusion we can draw is that the college, under Elaine Perilla’s leadership, has decided to punish staff at The Ledger for practicing the hallmark traits of a free press taught at the award-winning college Charles Carlsen played a major role in creating. It is our belief that the 1-5 vote barring us from publishing is based on misinformation and is a concerted effort to stifle the truth.

Why is it, we ask, can an estimated 600 temporary employees can be hired without discussion, as is the ordinary course of business at the college, and a handful of student journalists can have their budget request held up to such scrutiny? And, then be denied use of student activity funds already set aside for their use?

We call on the Board of Trustees to reconsider its vote in a special session. We ask that the board base a new vote on our true budget. Any other action continues the recent tradition of conducting the public's business outside the public’s view.
by Miguel M. Morales

BREAKING NEWS: Do the Right Thing 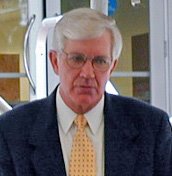 The Kansas City Star reports the Board of Trustees has hired my favorite of the three interim president candidates, Lawrence W. Tyree.

Previously, trustees announced they would name the interim president of Johnson County Community College at their regular monthly meeting, June 15.

Tyree temporarily replaces Charles Carlsen who voluntarily retired after I broke the story alleging he sexually harassed an employee. Tyree will also aid in the search for a permanent president.

Williams replaces Jon Long who resigned prior to the Carlsen scandal noting his inability to effectively advocate for students due to an atmosphere of institutional intimidation. Long sought to keep his job after the scandal broke. He said Calrsen's departure meant drastic changes ahead for students and staff and that he'd like to help guide them through the change.

For a while it seemed like the trustees deliberately did the wrong thing -- all the time. I mean, if it wasn't deliberate then just by sheer coincidence, they would have done the right thing at the right time.

In this situation, I think a happy coincidence happened -- twice. 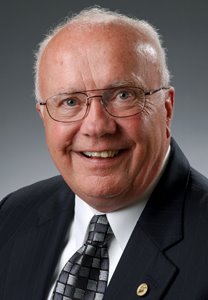 This week Johnson County Community College Board of Trustees interviewed three candidates for the interim president position. Charles Carlsen accepted voluntary retirement after I wrote a story in The Campus Ledger detailing my 13-month investigation that he allegedly sexually and unlawfully harassed an employee in 2003 and again began to create a hostile environment for the employee in March.

J. Larry Durrence, 66, retired president of Polk Community College, Lakeland, Fla. Durrence also twice served as Lakeland's mayor. Durrence said despite retiring in as PCC president in February, he wants to get back to work. He doesn't see himself as an agent of change but rather serving at the board's leisure. Despite trustee, Lynn Mitchelson, questioning Durrence's willingness to work with the student newspaper, he's not the man for the job. 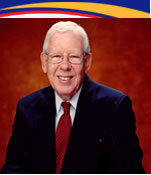 William B. Eddy, 72, Former dean of the Henry W. Bloch School of Business and Public Administration at the University of Missouri - Kansas City. Eddy also serves on the Kansas City School Board, which selected a new superintendent. Eddy said his participation on that board remains his first priority. Eddy has two established ties with the college through his mentor and one of the founders of the college, Ben Craig, the other from current trustee, Jon Stewart, who encouraged Eddy to consider the position. Clearly, these ties eliminate him from consideration.