I messed things up. I always thought there would be time to sit and have a chat with Sandra Moran. 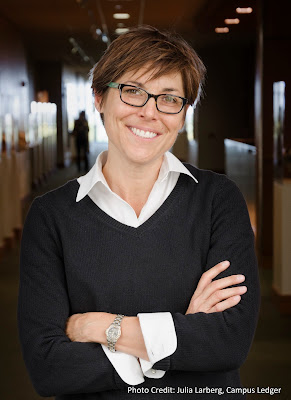 We work at the same place. We’re both writers. We know tons of the same people. I knew our lives ran on a parallel track and that sometime they’d cross long enough of us to talk about -- everything.

People who meet Sandra all say the same thing. She makes them feel as if they are the most important person in the room. I admit it always made me uncomfortable when she did that.

Every time I saw her or heard about her, she was rushing from one place to another. Sandra was always giving and teaching and supporting.

So when she'd do that you're-the-most-important-person-in-the-room thing with me, I’d feel great but I'd also feel a little bit selfish. I knew I was keeping her from the other pressing thing that would eventually pull her away from our stolen moment.

We regularly threatened to meet up when we had time to talk. But I knew there wouldn’t be such a moment unless we were trapped in an elevator or we were in a hotel bar on the last day of a writers conference. Then we’d talk. I’d learn all the things I’ve read this last week about her on social media.

In Lak'ech Ala K'in | I am Another You. You are Another Me

I'm spending the morning in high school. Everything is much smaller than I remember ... except me.

My friend Jackie Madrigal pioneered a US Latino Literature class at Shawnee Mission North High School in Mission, Kansas. She invited Chato Villalobos and myself to be guest speakers to help put some faces to Latino literature and to talk about the Latino Writers Collective and our writing processes. Both Chato and I are honored to be asked. Her curriculum is thoughtful and hits all the major notes in the rather large genre.

As this day grew closer, my social anxiety started to wrap itself around me. In fact, last night I spent some time thinking about how I could get out of this gig. Chato could do the presentation himself. He's a police officer and therefore automatically much more interesting, right? Besides I have to work that afternoon and there's a chance I could be late. My tummy still kinda hurts from when I was sick last week. Also my car is pretty old and I don't like to drive it more than necessary ...

What Does Your Name Mean??

it means you can't shorten it
because you think it's too long
or that you can "americanize" it.
it means when you accidentally
and repeatedly fuck it up,
you’re actually doing it on purpose.

it means when some people read it
or hear it’s soft vowels and rolling r’s,
that they will instantly hate me.
it means people will assume
that i speak Spanish.

it means people think they have the right
to interrogate me about
where i'm from,
where i'm REALLY from,
when my family came here.

it means when i use my credit card,
i have to show a “valid” ID.
it means when i do show my ID,
store managers look closely at it
to see if it's real.

it means when a friend says it,
tension leaves my body.
it means I am safe
and that good things
are about to happen.
when a loved one says it
it assures I’ll respond with my heart.

it means when i see it published
all the pushing back against
the bullshit that surrounded it
was worth it.

it means when people with similar names
see it in an anthology next to other
beautiful harmonious names,
that they can smile knowing,
but not fully knowing, the journey
it took to get them on the page.

it means we can love own names
and forgive ourselves
for all the times
we hated them.

Here is an expanded version of my farmworker post, 'Tender Hands' featured on my other blog, The Last Year

'When I was 10 years old, I began working regularly with my family as a migrant farmworker. I'd done it previously, but only on Saturdays, to help them catch up when tornado warnings ended work early or when the patches of weeds were particularly thick. The summer of my fourth grade year, it became my full-time job.'

I’m thankful to PRI’s Anglilee Shah who read my original post and reached out to me to feature it on PRI.
by Miguel M. Morales


"Too often, the submission guidelines read “Proof of US Citizenship” or “Legal Residents Only.” This small, but powerful, statement serves to exclude 11.7 million undocumented people (according to the Pew Research Center Hispanic Trends Project in 2013) from participating in a multitude of poetry opportunities—from first book contests to applying for major grants."

I work with amazing poets who happen to be migrant farmworker youth and I'm proud to have signed this petition. Chances are that some of the youth are undocumented. I don't ask. If they want me to know, they'll tell me either in person or or in their writing.

They are part of the reason I write to share our stories, our lives. My hope is that they will embrace their natural storytelling skills and become writers or at least be more confident in their ability. I know it's only a matter of time until one of them, one of them takes the brave step to submit work for publication.

That's why I signed the petition.

According to the organizers, some journals say they must support citizenship/residency requirements because they receive federal funds. Yes, that's true. However, having worked at nonprofits, I can tell you there are times when federal residency requirements are not and cannot be collected (street outreach, public lectures, workshops/panels, etc.). Even if it were possible to collect the information, nonprofits don't have the resources to investigate and confirm residency or citizenship claims.

Since it's unlikely that states and the federal government will eliminate such residency regulations in funding, there's a way around it -- DON'T USE STATE OR FEDERAL FUNDS FOR THESE CONTESTS.

I get it, offering a prize like publication of book is a really big deal and it can cost thousands of dollars. If an organization relies on one funding source for such an endeavor and that one source is the state or federal government, it's only a matter of time before said funding is restricted or eliminated. Clearly, the organization has bigger problems than keeping undocupoets from submitting work.

Aside from first book contests, some journals offer a cash prize. While some cash prizes are in the thousands, usually a contest prize is less than $500. Some offer no prize at all other than publication of the work and maybe a free copy (or discounted copy) of the journal. What's the logic in excluding undocupoets from these contests?

I know things are rough for presses and journals, but with the recent efforts of #WeNeedDiverseBooks and #DontSelfReject, excluding voices from publication based on residency is about as crazy as limiting them based on education (don't get me started on that).

Because of these and similar efforts, presses and journals now feel the urgency for diversity in publication (whether they act on it is a different story). But maybe these publishers simply want the diversity of a community college course catalog where an older white guy sits at a table with a Black girl who has her book open while an obviously young Gay Latino on the other side of her smiles. An Asian man at the same table laughs at a joke and white girl sits in a wheelchair holding a tablet as they all study at one of the many outdoor study areas. It's fun, it's pretty, and most of all it's not complicated.

One day soon a young farmworker from the Midwest, perhaps undocumented, who has shared her story only with a select few, will feel the support and encouragement of her mentors and friends. And with a prayer on her breath, she will be bravely submit her words to a contest for publication.

Not only does she deserve the chance to win, she deserves an opportunity to be heard.
by Miguel M. Morales