AWARD: Journalist of the Year

From a campus press release: 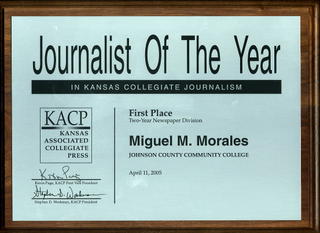 Miguel Morales, managing editor for The Campus Ledger, was named College Journalist of the Year by the Kansas Associated Collegiate Press at its convention in Wichita April 10-11.

Morales has worked as reporter, writing coach and editor-in-chief for The Ledger.

“I always knew one person could make a difference. It’s encouraging to know that sometimes that one person gets recognition,” Morales said.

In addition to Journalist of the Year for two-year schools in Kansas, for which he won a plaque and $250, Morales also won five individual awards.

Writers from The Ledger swept the feature category as the paper won first, second and third place. The Ledger received a bronze medal in the overall category. Other individual winners include:
by Miguel M. Morales