I Just Totally Posted That!!


Annameekee Hesik, author of "The You Know Who Girls: Freshman Year" reads a found poem compiled from her students' Facebook statuses for one day. The reading takes place at the Lambda Literary Foundation's 2012 Writers Retreat for Emerging LGBT Voices
by Miguel M. Morales


The YA cohort finally finished its manuscript critiques! YAY for YA! We enthusiastically turned our attention to our long-awaited writing prompts.

A few days after Lambda notified the us we’d been selected for the retreat, our mentor sent an email asking the YA group to do the following:

ü Read Anne Lamott's book, "Bird by Bird: Some Instructions on Writing and Life"
ü Bring a 15-25 page manuscript of an unpublished work-in-progress for critique.
ü Bring hard copies of all the other participants’ manuscripts noting (a) strong points, what worked, what kept you reading, etc., and (b) what you think could be improved/strengthened, what would inspire you to read more, etc.
ü Bring a favorite poem about growing up.
Every morning we stared the session with a poem or two. By day 6 we’d burned through all the poems. Today we brought our teen photos. We all agreed my roommate Jef had the best photo. It was his prom photo and it was so horribly bad that it was good. It was out of focus, bad poses, people halfway out of frame, I mean it was classic. It was the kind of bad photo you’d proudly put on the inside of your locker door and know it was totally rad.

In preparing my list of items to bring to the retreat, I forgot about the photo. On the plane, I looked over the list from Alex and remembered I hadn’t selected a photo. When my friend picked me up, we went to his house and I logged onto Facebook to print a photo (any photo) of young Miguel. 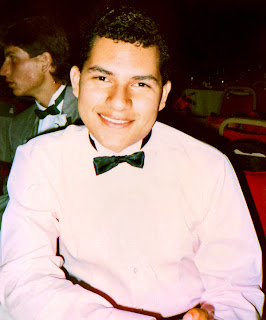 My photo, like Jef's, was of my senior prom. I sat at the banquet table (it was a dinner-dance). The guys sat on one side of the table and their dates sat across from them. On my side, all the guys wore white tuxedo shirts. Mine was pink. Across from me, my date was the only one wearing a bow tie and a white dinner jacket. Everyone else in his row had big '80s hair and prom dresses to match.There we sat, two guys at prom, and no one said a word. We took our prom photo together like everyone else. Even then, 25 years ago, it was strange how natural it felt for us to go to prom together. I don’t remember anyone making a big deal out of it. If they did, I never heard about it.

Teen years can be difficult so I was happy most of the group shared their picture and their stories. Some didn’t and I respect that because looking deeper at my picture, I could’ve written some dark stuff. It wasn’t all rainbows and glitter for young Miguel.
Read more »
by Miguel M. Morales

For the past few days the YA group sat for three hours each day for intense manuscript critiques and very little writing. The critique sessions starting to get tiresome. Maybe it was just me. I got feedback on my work earlier in the week. But everyone deserved to get proper feedback and for that feedback to be as fresh as it was on the first day. That’s what I tried to offer. I also took notes on the other critique sessions. Some of it made sense for my manuscript or for my writing in general.

After the usual round of feedback, we worked on a handout from our faculty mentor. It felt good to do some writing and to focus on exercises that allowed me to learn more about the characters I’ve created and the world they inhabit.

After lunch part of the YA group had decided to visit the Getty Museum which was just a few miles away. I really wanted to go but I decided to stay and work on my revisions for the LLF fellows reading that evening. The first part of the week, LLF faculty mentors read their work in a stunning display. Well, it was our turn. This was the first of two days where LLF fellows would read. A few of the YA fellows signed up for the first day taking various spaces in the top 10 slots. I signed up with them just to get it over with and to have the comfort of reading in the company of my cohort. We learned about the reading a few weeks before the retreat so I made sure to bring some of my poems. I’d never read from my manuscript in public and I wasn’t sure I wanted to.

Uh, yeah. She did. And I think I know why:
Read more »
by Miguel M. Morales

By day four, everyone settled into the routine of intense class work, homework, and rewrites. It seemed to me that we were being polite, professional and, well, a bit stiff. The evening program included a publisher’s panel that sorta sucked the energy from the group, energy that had been building over shared meals and classroom discussions.

After the panel, I returned to my residence hall. Deciding to step away from my uncomfortable dorm desk with its rickety chair, I walked down the hall to the dorm lounge. I spread out my work on a table. A few moments later, my roommate, Jef, joined me. We’d developed a friendship and rhythm that doesn’t come easily for me when I meet someone new. It comforted me to know I could still connect that way with another person especially since I’ve spent the last few years making sure no one got particularly close. Jef and I worked quietly in the lounge interrupting the silence with an occasional observation or question then returning our attention to our laptops.

The atmosphere suddenly changed when Christina Clover, the loveliest of Brits and one of the YA participants, stepped into the lounge. She was waiting for another LLF fellow to return to campus with her wine. Christina plopped down on the sofa and asked, “Present company accepted, who would you shag? Who do you fancy?”

Ohhh, she was naughty and inappropriate and we loved it! Since our pinky swear is still in effect, I won’t go into the details of who we dubbed shaggable and/or snoggable. I’ll just say we had terrific fun. Tequila made an appearance, as did Nina’s beer and Christina’s wine. Other members of the YA cohort joinedour inappropriate fun. It’s as if we’d been waiting for this breakthrough, a chance to let our hair down and to finally stop sucking in our guts. We laughed from that authentic place where we were free to be who we were and we were doing it around people who made us feel safe. I’m sure this happened to other LLF fellows across campus. LGBT writers were bonding.

Of course, we also talked about our manuscripts, about writing, about our writing communities. As Nina, Christina’s roommate, was talking about her graphic novel, I realized how easily I could’ve missed all this because of a lousy twenty bucks.

Back in the spring when I looked over the application for the retreat, I frowned at the twenty dollar fee. I mean, clearly, twenty dollars isn't much money but it adds up if you apply for several contests or fellowships. I was still trying to clear my credit card bill from the expense of the AWP conference in Chicago a few months earlier. I knew I wanted to apply to LLF but, twenty dollars, that's my gas utility bill. Twenty dollars is enough to get me to work for month. Twenty dollars is half of my cellphone bill. I mean, I kept thinking of the things I needed to do with twenty bucks. Finally, I had to say to myself, "Dude, it's only twenty dollars. Are you really gonna let twenty bucks keep you from what could be an incredible opportunity?"

That week, I easily cut back on a frivolous expense to cover the application fee. Actually, it was such a frivolous expense that I don’t even remember what it was. Clearly, my apprehension wasn’t because I couldn't spare twenty bucks. It was something else. It was the inner-voice in me that said, “They’re not gonna pick you. You’re just wasting twenty dollars. Sure, you’re talented enough for Kansas City but you can’t compete with people from all over the country. These are educated people, people with published books, people who won’t understand you – they never do.”

But another voice in me said, “You can do this. They will pick you. You know they’re going to pick you. Twenty dollars is nothing! You give twenty dollars to just about anyone who needs it. And let me tell you this, buddy, you need it. This is an investment in yourself. You have to decide if you’re worth twenty dollars. And if you’re not, well, then you’ve got a lot bigger problems than trying to scrape together twenty bucks.”

After our evening of inappropriate fun and bonding, I laid on my noisy concave mattress knowing I’d made the right decision. The twenty dollar application fee and the rest of the money spent on the trip was worth it – and it was only Tuesday.