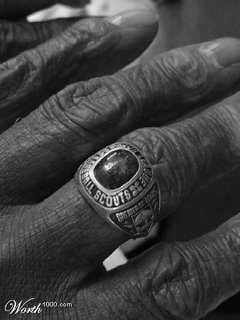 I'm thankful for not reading headlines like, "The Buck Stops Here," or "Passing the Buck" concerning the loss of Buck O' Neil.
Buck was really an ambassador not only for baseball -- the likes no one has seen in years -- but he was an ambassador for Kansas City.
Try to think of famous people associated with KC.
There's that jazz guy, Bird, whose death was hastened by drug and alcohol addiction ... Who else?
KC tried to claim Hemmingway but he never really contributed to the city. They also try to claim Walt Disney but that's really reaching. And off the top of my head I can't think of anyone nationally or internationally known who comes from KC.
Buck was really our only celebrity.
There's a lot of lessons to take from his life that our city will probably ignore.
He was so dignified when he was passed over for the hall of fame.
He represented diversity in a city that is soooo racially divided.
I'm also sure there were times that the only reason people went to see the Royals was when Buck was there.
I mean just the fact that a non-sports gay guy like me not only knows who Buck is but respected him means that his influence really surpassed sports.
If all people remember is that he was a Negro League player, then they really didn't know Buck at all.
by Miguel M. Morales