This article was originally published in The Campus Ledger Nov. 16Walking on the Ledge:
Carlsen’s Enchanted Evening

By Miguel M. Morales
Being accused of unlawful harassment is the best thing to ever happen to Charles Carlsen.
As the former president enjoys retirement, Larry Tyree, interim president, tries to heal the college while enduring the Board of Trustees.
Last Saturday, a bolder Carlsen demonstrated his lack of integrity by attending the JCCC Foundation’s annual scholarship fundraiser, Some Enchanted Evening. Carlsen’s repulsive return to public life came with another revelation.
“Because Dr. Carlsen has been so responsible for building this college, the Foundation and the scholarship, the Norman and Elaine Family Charitable Foundation, which really is our private foundation, has granted a second $25,000 legacy sponsorship tonight. We want to put it to the Charles and Linda Carlsen Johnson County Community Foundation Scholarship Fund Endowment,” Norm Polsky said to a shocked crowd at the black-tie gala.
In April, The Campus Ledger investigated and published the first of multiple allegations of sexual harassment against Carlsen. He stepped down the next day and unexpectedly retired a week later.
Yet, Carlsen remains on the Foundation’s board of directors. 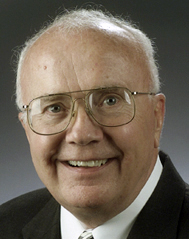 The Polskys have built a legacy of giving that has touched millions. Carlsen has only touched a few.
Carlsen’s appearance taunts the women who made the allegations of unlawful harassment.
He knows they won’t file a complaint with the Equal Employment Opportunity Commission nor will they file a civil lawsuit because they don’t want to hurt the college or put their families through that process.
“Friends of Carlsen have been contacting me asking ‘What can we do to show our appreciation?’ Well, it’s now up to those families here tonight and elsewhere that want to contribute $1,000 or whatever to this tax-deductible endowment,” Polsky said.
Polsky expects Carlsen’s endowment to grow to $100,000 by Dec. 31.
He also said an agreement with the Foundation dictates that it will not award this scholarship for five years.
That’s when the endowment should reach $300,000. Its earned interest will generate a minimum of 60 $1,000 scholarships per year.
“The Charles Carlsen scholarships will go on forever,” Polsky said. However, the Foundation already offers a scholarship in the Calrsens’ name. “I hope they will merge that into this endowment,” said Polsky.
There is no dispute that the Polskys have given millions of dollars to many organizations as well has having donated their time. The Polksys have built a legacy of giving that has touched millions.
Carlsen has only touched a few.
“I hope that all of you will send to the Foundation your contribution marked for the Carlsen scholarship before the end of this year,” Polsky said to funders in the audience. “I realize that there will be other efforts by other people to recognize the Carlsen contribution to the college that may be kept separate or joined to this Polsky plan.”
With this obsessive attempt to salvage his reputation, Carlsen reveals his true nature – that he has no problem using students and funders to get what he wants.
“You know how Chuck Carlsen is one great sales person?” Polsky said of one of his early encounters with Carlsen. “Dr. Carlsen came to our home to make a sales pitch. I said to my wife, ‘This is sure going to cost us.’”
That’s right, Norm. It sure is.
Polsky said the paperwork for the Carlsen endowment awaits signatures of the Carlsens, the Polskys, Tyree and Foundation president, Jill Gerlach.
The college and the Foundation should concentrate on disbursing the thousands of dollars in unawarded scholarships than creating another endowment to save one man’s reputation.
Contact Tyree and Gerlach and tell them not to sign those papers.
Tell them not to fall for Carsen’s latest pitch.
Tell them not to sell our integrity.
Tell them the cost is too high.
by Miguel M. Morales