THE CAMPUS LEDGER: Perilla's Past

This article was originally published in The Campus Ledger Nov. 2 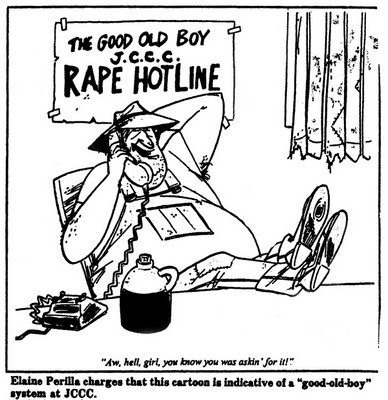 In 1992, Perilla, a professor, asked trustees to intervene on her behalf regarding harassment of a sexual nature

“Seems like the 1992 Elaine Perilla was a different person than the 2006 version.”
Stu Shafer, professor of Sociology

Baumgardner said anyone who examined her record as a trustee would know that she was never “bamboozled” by anyone.
“She was very opposed to Chuck Carlsen and his administration,” Baumgardner said.
However, Baumgardner said Perilla’s attitude toward Carlsen changed upon becoming a trustee.
“All the things she was concerned about absolutely disappeared once she was on the board,” Baumgardner said. “But before she even took her seat [in 1995], she made peace and had become good friends with Carlsen and Fred Logan.”
Logan was appointed to the board in 1992. Perilla succeded Logan as board chair in 1997.
Currently, both Carlsen and Logan serve on the JCCC Foundation Board of Directors.
In addition, Logan, who is an attorney, represented Carlsen during the scandal involving allegations of unlawful harassment.
According to the Badger report, Carlsen ceased cooperating with the investigation on the advice of his lawyer.
Stu Shafer, professor of Sociology said he’s seen the Journal Herald article now circulating around campus.
“Seems like the 1992 Elaine Perilla was a different person than the 2006 version,” he said. “How can you trust someone who gets into office by condemning the ‘good-old-boy system,’ then, when she gains admission, participates in the same kind of mismanagement and obfuscation?”
Shafer said that year the Faculty Association supported her campaign.
“She promised to improve communication between faculty and administration,” he said.
Frank M. Syracuse, professor of Economics agrees with Shafer.
“It appears Elaine forgot why she was elected, and she too succumbed to the trappings of power,” he said.
Perilla recently served as board chair and now co-chairs the JCCC New President Screening Committee.
Contact Miguel M. Morales, news editor, at mmorales@jccc.edu
by Miguel M. Morales